Do you ever like to think of yourself as having a hobby or skill that really you don’t have?

For example, in conversation, you may say ‘Well, as a keep fit enthusiast, I prefer free weights to aerobics’, when in fact you joined the gym three years ago and have only been five times in as many years, and stopped when you inelegantly flew off the back of the treadmill…..? Or, perhaps you might fancy yourself as a wine connoisseur, because you enjoy drinking a lot of whatever is on offer in the supermarket bargain section? (Not that I’m speaking from experience in either of these cases you understand, but you get my drift?)

I’m like this about knitting. I fancy myself as a knitter. Indeed, I actively enjoy knitting, I was taught at my mother’s knee after all. But somehow……I can’t get to actually finishing much of anything I start. 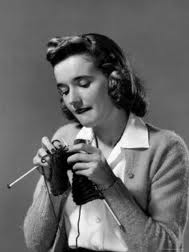 The storage areas of my house are home to abandoned yarn – usually with several inches of whatever project it was I started still on the needles, shoved into the discarded skeins.

I think it helps if you are knitting for someone or for something, rather than just because. For myself, there’s a limit to how much drawer space I actually have for yet another slightly holey garment* that didn’t quite turn out as I’d imagined, but that I can’t bring myself to rip-back – because I actually finished it! 😉

My husband is the (un)happy recipient of a few of my knitting ‘ideas’. It took me two years to knit him a pair of socks, which turned out to be so huge that they are only suitable for wearing as bed socks in the depths of winter. Probably a stitch tension issue? I decided that the pattern I followed was too complicated for me and chose a simpler one that only used two needles. It’s been a further two years and I have got about three quarters of the way through one sock…. Hmm….

He also has had earmarked for him: (i.e. intended as loving gifts for him, and yet somehow……)
i) half a scarf
ii) some yarn that would make a great jumper type thing, as yet unused.

Don’t get me wrong, I really do enjoy knitting, but perhaps it’s more about the process for me, than the end result. Simple knitting can be very meditative, no?

Since the sock debacle, I’ve knitted myself half of this cardigan: 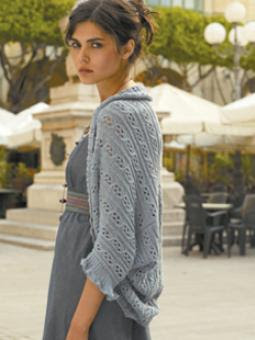 It’s called Twirl and is a pattern for Rowan by Sarah Hatton. When I started it, I had visions of myself wearing it this summer……﻿

And…….a few weeks back I started this: 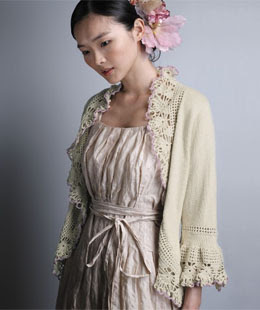 Wish me luck and watch this space for future updates.

Do you have projects or pastimes you like to pursue just for the journey rather than the end result? I’d love to know about them.

*I think holes are the way to go 🙂

Next: Back to wedding dress stuff and sewing.

This is Rachel wearing her fabulous floaty silk chiffon wedding dress. Rachel had specific ideas about the exact colour of her dress, which she...

I've wanted to show you this dress for ages, because I really enjoyed making it! It felt like a real  creative collaboration between myself and...

Happy New Year!Are you interested in learning to sew? Got a sewing machine somewhere gathering dust? Well look no further...I shall be...